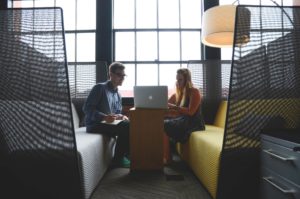 There is nothing like interactions with other people to give one a “reality check” if we take the time to pause and reflect on our exchanges, examine the roles we play and allow the potential for grace to exist in any moment if we are open to truly receiving one another.

We experience countless exchanges any given day. It could be a stranger we pass by on the street. I work in an area of town where homeless and destitute people regularly cross my path. Me with my designer handbag, stylish outfit, fresh shower and expensive hairdo. Meet man, mismatched clothes, scraggly beard, disheveled hair, and distinct odor. Do I cross the street to avoid contact? Do I smile and say hi? Do I tug my purse closer on the opposite side of my body? Do I cringe knowing he will ask me for money? Do I drop my gaze down to the concrete and briskly walk by without a word?

If given the opportunity, a stranger can morph into an acquaintance we remotely know with a potential for more. Sometimes the relationship stays in that realm, or if given the effort by both parties to unfold, advances into a friend, companion, colleague or the closest of all relationships, an intimate partner and family.

As a single person putting myself out there in the dating pool, I have tried many avenues to meet people such as the internet and dating apps. A disposable culture in the greatest sense, I view photos of people and instantly swipe left or right based on looks. If serious in my efforts, I may quickly read the short blurb they’ve written as a tiny glimpse into their mindset before making a decision on appearance alone. Granted, physical attraction is important in the grand scheme of a romantic partnership, however is not the mere definition of love, “to be loving”? Unconditionally, yes. Conditionally, no.

This week I interacted with a man who quickly expressed he was attracted to my photos and within few exchanges boldly expressed he would like to kiss me. Yes, if you have not dated in awhile, welcome to the fantasy of instant intimate relationships. Long gone are the days of respectful courtship getting to know one another while slowly sipping lemonade on the front porch swing holding hands. He had some of the basic qualifications I was interested in, nice eyes (windows to the soul), professional appearance, witty banter and a fueled alchemical instinct to delve deeper. I did have a sense of uncomfortableness over his eager attitude, but nothing ventured, nothing gained so we began texting.

My intent was to learn who he is as a person. He had interest in meeting me. In an effort to balance a happy medium, I suggested answering questions about each other and proceeded to ask if he was single. He acknowledged “Yes”. One would think for a single person on a dating site that is a given, however as I have also experienced it is not. He expressed he hated texting answers to questions and asked if I would email him my list. I laughed to myself and replied “I do not have a list, I just thought it would be a fun way to get to know each other” He swiftly produced 3 questions. Do you smoke? Do you like NASCAR? Do you watch FOX news?

Easy questions. I do not like smoking, never have, never will. As far as NASCAR, I love it. For a news channel, I do not watch a lot of cable news but in the rare occasion I do, Fox is likely. My perception was, we were off to a great start, liking some of the same things.

Before I could get the next text out to ask him a question, I read “It is not going to work”. I thought he was joking. “Those are my weed out questions” he followed. Was he showing me how silly a list of superficial questions is? I kiddingly replied “I agree, it won’t work”. Why would I believe he was serious when minutes earlier he was schmoozing me over with kissing emojis and proclaiming how wonderfully matched we were to undertake such personal interactions?

Then the texts began to fire like bullets from him to me….. “I hate NASCAR.” “FOX news is responsible for the erosion of our society.” “You watch FOX news and are responsible too” More FOX texts before I could even finish the sentence “I have not been to a NASCAR race in years.” He accused, “You said you “loved” NASCAR.” I reminded “I said I do not watch much news.” As my mind tried to comprehend what was happening I knew in an instant there was no rational conversing with this person and had zero desire to try to explain my answers he twisted so inaccurately. “Good bye. God speed to you.” he concluded. Dazed, I responded “Wow. Good bye” and deleted the texts, blocked his phone number and unmatched him in the app. So much for me being a fox to him minutes earlier.

Granted, there is a whole life time of individual experiences behind the very short exchange and neither he nor I have ever walked in each other’s shoes. The joy that existed in the possibility of getting to know this other human being and the openness I had in my heart to explore whatever potential existed for where it could lead was quickly shut down by two brief questions that contained way more depth to the answers ultimately used to judge me so harshly. Now I understand why he hates 20 questions, likely never getting past the first 3.

My personality has always been one of a sensitive soul who innately carries a vast amount of love and desire in my heart for pure connection with others. A genuine compassion and willingness to sympathize with other people’s life experiences. As a sensitive child, it never took much for my feelings to be hurt and to burst into tears. What child has not had to quickly learn through the course of our life to learn to accept the cruel rejection of others, whether it is a rejection perceived only within our mind or actually stated to us out loud? Even worse, how about the judgment and exile of one’s own self, creating inner feelings of less than, unworthiness and an inability to ever meet the expectations of another?

While it is easy to dismiss a potential suitor as a jerk and quickly move on in the search, what better opportunity is there for two people to express love through an open willingness to embrace each others differences? A genuine interest in taking the time to get to know one another? To listen to each other’s perspectives without getting defensive in protection of our own? To allow God’s miracles and grace to occur in exchanges, without cutting someone off and never finding out the depth and fulfillment of where a meaningful conversation and relating could have actually led?

This is only one very simple example in the infinite many. One brief exchange invoking a much deeper topic and sadness within me, a frustration for the billions of people in this world and the unsurmountable feelings of despair in how will we ever get past our multitude of personal judgments to find a common ground to honor, love and respect one another and the Earth we all share?

I wish I had the answers. I turn on the tv or glance at written headlines long enough to see the global negativity, hate and difference of opinions swirling around ready to ruin the day and beat me down if I accept it. If I allow the misperceptions and critique of even this one brief encounter to jade my willingness to connect with another human being I potentially label myself as a victim, possibly throw all men (or women) stereotypical disrespect, make a general claim how difficult it is to meet nice people and perhaps even stop putting myself out in the world altogether.

The truth about experiencing and witnessing years of rejection is that it has not defeated me. I have shed countless tears that opens my heart even wider and continue to offer the gift of myself to be experienced by anyone who is willing to give up a few seconds of their time with an equal interest in receiving each other as who we truly are, two souls trying to function in a world filled with duality, harsh judgments and disposable attitudes.

It would be a lot less painful if I convinced myself I do not care what anyone else thinks. Isn’t it through that same genuine care and concern for ourself and others that we truly create a sustainable future we are all proud to collectively be a part of and equally accepted in?

Back to the homeless question. I generally stay the course down the same sidewalk walking the path towards the man unknown and I look him in the eye, I smile and I say “Good Morning.” 9 times out of 10, he will nod his head at me and say some form of hello back. Granted, I do not pause long enough to ask him what he thinks about NASCAR or FOX news, but chances are he does not have an opinion because he is more concerned with finding some form of peace to fill the void in his stomach from living in a world filled with constant rejection. Saying hello and a smile is far, far from enough of what he deserves, however acknowledging another persons existence from a space of loving acceptance is certainly a start.

I do not claim to be a master of non-judgment. I do remain willing to believe compassion should always be the foundation of any interaction and maintain the innocent belief that somehow, some way, LOVE WILL ULTIMATELY WIN.