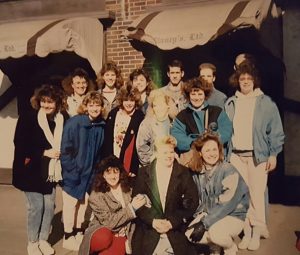 The year was 1988 and I won the lotto. Well, for a newly turned 18 year old it was like winning the lotto after my name was drawn as one of a limited number of high school seniors able to participate in a multi-school class trip from Cedar Rapids, Iowa to New York City. I was so excited to go, my first real travel to territories unknown!

Months later on a cold March blustery winter morning, my borrowed plastic suitcase was stuffed full as I boarded the bus. With my big purple plastic wide toothed comb tucked securely in my back pocket, I carried my walkman in one hand and clutched the wad of travel money stuffed deeply within my purse. I waved good bye to my parents knowing it would be awhile before I talked to them again given the cost of long distance phone calls. My classmates and I, with our dutiful willing outnumbered chaperones, were comfortably seated in the red velour seats finally bound for the Big Apple! We chatted, laughed, sang, slept and chatted some more as our long journey progressed northeast across the great United States.

Weary and a lot quieter than when we began, we arrived early morning into Manhattan. The bus driver surely timed it well as the city street lights twinkled in the predawn hour with “less” traffic as he maneuvered the big bus down the various narrow streets. My tired eyes widened as I looked out and saw the billowing towered buildings that now engulfed us. 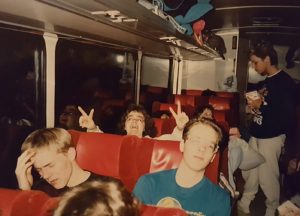 We each had our assigned roommate as we shared a tiny room at the YMCA. Our quarters were concrete, dark and small, just large enough for two single beds, a small antenna tv and our lip gloss, hair gel and Aqua Net. Who cared! We were finally here!! The long awaited adventure was reality and we were ready and willing. The agenda included the broadway show CATS, a trip to the United Nations building, the World Trade Center, Ellis Island and of course our first subway rides. 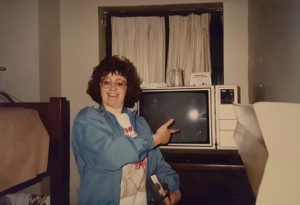 The first day we began with “free time”. I heard buzzing that some classmates were on a mission to seek out fake ID’s. They shall remain nameless, not to protect their identities, but because I was not cool enough to be invited. I committed to flock with the small group of girls who took after my own stylish heart, we were headed to explore designer name brand heaven know as Macy’s!! It wasn’t Thanksgiving Day, but it sure felt like it!

It was chaotic in the lobby as everyone sorted out who they were going with and how to get there. I walked outside with a couple of friends. They meandered back into the building to see what was taking so long as I continued standing up against the brick wall in front of the YMCA eagerly waiting to get going. It was another chilly morning, I had on a sweatshirt, blue jeans, my grey with pink striped Nikes and my warm blue turquoise trimmed in black jacket. 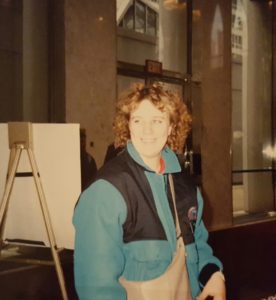 As I stood there impatiently waiting, across the street I noticed an older man wearing a suit and carrying a briefcase walking down the sidewalk. He looked my direction a couple of times and began to cross the street. I nervously looked around as he grew closer. As he approached me I heard him utter words in his garbled accent “How much you want?” I looked at him confused and whispered “What?”. He looked at me again and repeated the words, “How much you want?”. He paused briefly. “Fifty?”. I stood like a deer in headlights. He asked again. “One hundred?”. I felt the adrenaline well up quickly inside of me, my face flushed and heart pounding as I exclaimed “I don’t think so!!”. He quickly looked me up and down, shrugged his shoulders and muttered “Hummph” as he strolled back on down the street. I quickly turned and ran back into the lobby to safety, too embarrassed and stunned to tell anyone what had just occurred. The unwitting group was finally ready to go. With directions in hand they led the way and I was once again safely in the pack.

We excitedly entered Macy’s grand doors and found our way to multiple floors of shopping bliss. I remember the numerous escalators as we joyfully cruised around looking at purses, clothes and shoes while very carefully contemplating what to buy with our limited allotment of spending money. With so much to see, we drifted our separate directions into various departments and fitting rooms. I cannot tell you what if anything I purchased, however what is burned into my memory today is the panic I felt when I realized I no longer recognized any of the people surrounding me in the store. I hustled from area to area looking for a familiar face and unfortunately none were to be found.

My heart raced as I quickly paced up and down the aisles, retracing steps and looking around full racks. I ventured down onto the other floors yet no one I knew was there. The chaperones threatening words pulsated in my mind “Do NOT be late returning to the hotel because once the show starts you will NOT be allowed in!”. Whether it was true or not I began to panic, not quite sure where I was or how to get back to the hotel. Remember, there were no cell phones, GPS or personal assistants named Siri. All I knew was the name of where I was staying, no map and a sickening need to find my way back. I rushed out of the store back into the sea of people as I tried frantically to remember which direction we came from. I was confused and scared, too afraid to try and hail a cab or to talk to strangers. The menacing words repeated over and over in my head “DO NOT BE LATE!!”. 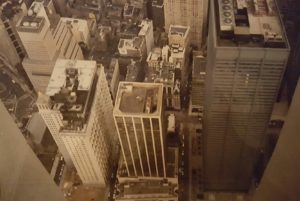 I raced down the street trying not to bump into people, searching each corner for a point of reference and wildly wondering if I was even going the right direction. Finally a tall angel in blue appeared. I spotted a policeman in the distance and as I rushed up to him I breathlessly gushed my plight. He calmly repeated directions until I understood and waved me on my way. I walked as fast as I could without running and in a cold sweat in what felt like eternity, I finally spotted the entrance where I had stood earlier and no idea as the day progressed I would become even more frightened. I ran up to my room, fumbled the key in the lock and burst open the door into what now appeared as the best room I ever laid eyes upon. My roommate meandered out of the bathroom and questioned, “Where did you go?”

Where did I go? Where did I go? I wasn’t the one missing, they were! It is crystal clear I was no Macauley Culkin. To my credit, no one knew who he was until November 1990.

Fortunately I made it to the broadway play I so desperately wanted to attend. I didn’t enjoy it as much as I could have as the movie of my harrowing day played in the background of my exhausted mind. I vowed I would not be separating myself again from the group anytime soon!

You may be wondering where were the chaperones? Great question, I really don’t know the answer but is fair to assume they were probably with their own kids.

After a good nights rest my naive excitement soon returned and the jam packed agenda continued on. One of my favorite highlights of the trip was taking the ferry to Ellis Island and the opportunity to go up into the Statue of Liberty. I remember the volumes of history within the building and the capability to search the many names of immigrants whom had been there many, many years before. Surely they felt disoriented and as afraid as I had during my first day there? 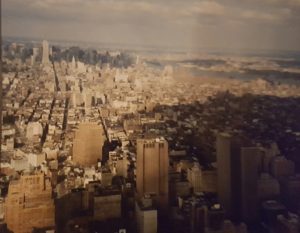 What I remember most about the Statue of Liberty was the narrow spiral staircase in side of her. Slowly climbing the steep steps upwards and upwards, we circled faces to butts herding our way to the top. It was hot, it was stuffy and there was no turning back. It seemed like forever until finally a short flat length of metal floor leveled out in front of me and I felt pressured shoulder to shoulder to hurriedly look out of her crown and snap my pictures before beginning the winding descent. 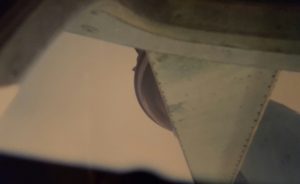 At the time the minor in me wondered if was really worth all the effort. It was. 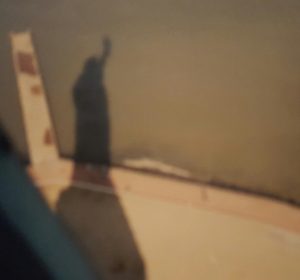 One of the infamous chaperones continued their job directing me and another to board the second to last ferry unaccompanied as they waited for stragglers. My cohort and I safely arrived to the park’s rendezvous point. As I sat on a short brick wall people watching, a man in a dark overcoat walked up to us. He glanced slyly side to side before flashing it wide open repeating the phrase “Wanna buy a watch?”. As rows of designer fakes glistened in the sun, my friends flocked around him inquisitively shopping for another treasure to take home.

I don’t remember a whole lot else about the trip beyond my photos, these are the memories that were ingrained upon my brain likely due to the strong emotions the experiences invoked with me.

It’s been close to 30 years since that youthful adventure. Sadly, the World Trade Center buildings are no longer here along with the priceless lives of others and a few of my classmates who have since passed. I am very blessed to be in contact with the majority of the friends captured in the snapshot preluding our great excursion that intertwined our hearts forever. I’m sure each one has their own exciting stories of what the trip meant to them personally. That is the beauty of experiences, each one is uniquely our own yet timelessly shared by the bonds of camaraderie.

I suppose my tale could have a lot of different endings given the perils of abduction, homelessness, and sex crimes. Despite my unwanted first day mini dramas, the trip fueled desire implanted deep within my heart for continued exploration to see much more of our world. Over the years my life continued to be blessed with global travel to territories much farther away and more dangerous than the borders of the United States. No matter how far the destination, I have always arrived safely to and from and thankfully never been the victim of any form of crime. One thing is certain, my army of guardian angels were working over time that week in 1988 and I suspect they have never ceased to do so since. 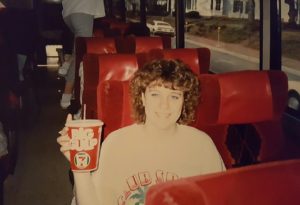 I no longer drink Big Gulps but as I take a big gulp, my confession is complete.